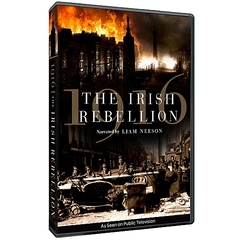 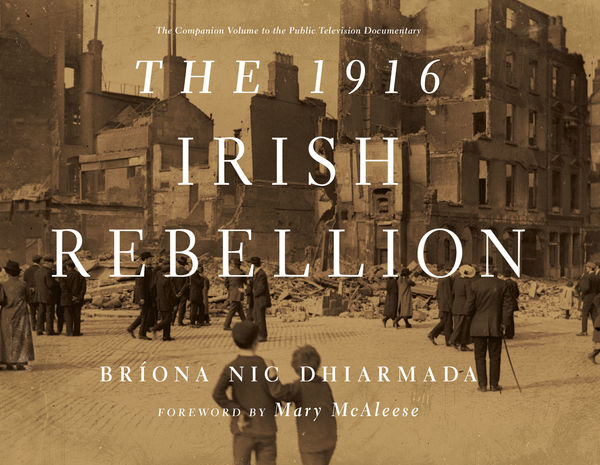 The DVD of the three-part series is available through SHOP PBS.

The three-part series is also available for downloading through Amazon.

The 1916 Irish Rebellion (University of Notre Dame Press) includes a historical narrative; a lavish spread of contemporary images and photographs; and a rich selection of sidebar quotations from contemporary documents, prisoners’ statements, and other eyewitness accounts to capture the experiences of nationalists and unionists, Irish rebels and British soldiers, and Irish Americans during the turbulent events of Easter Week 1916.Documentary writer, producer, and scholar Bríona Nic Dhiarmada has seized the occasion of the centenary of the Irish Rising to reassess this event and its historical significance. Her book explores the crucial role of Irish Americans in both the lead-up to and the aftermath of the events in Dublin and places the Irish Rising in its European and global context, as an expression of the anti-colonialism that found its full voice in the wake of the First World War.

Read the review in Library Journal (April 22, 2016): [Nic Dhiarmada] does an excellent job of gathering primary sources, visual and textual, that illustrate the build-up to as well as the events of Easter Week 1916. She goes well beyond the usual profiles of the leaders of the Rising and the stock photographs of the General Post Office. Her selection of textual sources is provocative of deeper reflection on the issues surrounding the Rising, not just the related military events.

Read more reviews, including the review in Foreword Reviews (Summer 2016): "The 1916 Irish Rebellion recounts the week-long conflict with novel-like celerity, tracing tactical missteps to eventual rebel defeat and the summary executions of rebel leaders that followed. Witness statements, letters from rebel prisoners, and ballads and poems inspired by the uprising are interspersed throughout the book. An impressive array of photographs provides further visual context, showing what urban warfare looked like in early twentieth-century Dublin."

Ordering Information for the companion book

On Easter Monday 1916, a small group of Irish rebels—including poets, teachers, actors and workers—took on the might of the British Empire.  Although defeated militarily, the men and women of the Easter Rising would soon win a moral victory—with their actions leading to the creation of an independent Irish state and contributing to the eventual disintegration of the British empire. They have inspired countless freedom struggles throughout the world—from Ireland to India.